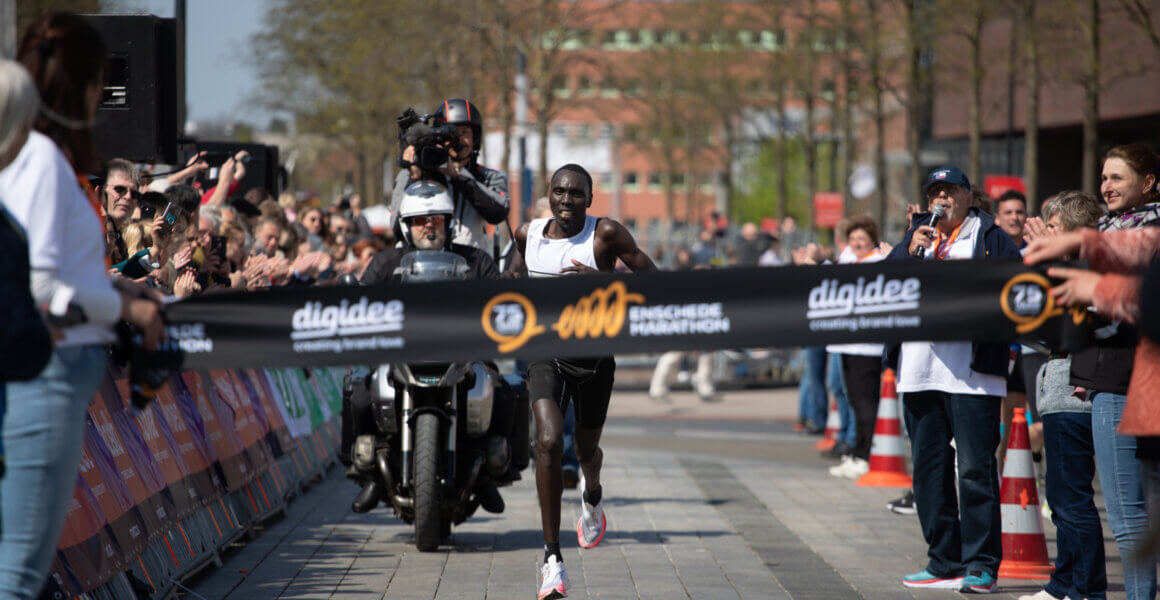 ENSCHEDE – What a party it was this weekend during the Enschede Marathon! Under almost perfect weather conditions, the 75th anniversary of the oldest marathon in the Netherlands and Western Europe was graced with tremendously fast times. The course record was broken in the ladies’ race, but not in the men’s race. In addition, female winner Maurine Chepkemoi ran a new race record, which yielded an extra bonus of no less than 10,000 euros. “These great performances made the running event this weekend in Enschede complete,” said Sandra Melief, director Enschede Marathon. “We could not have wished for a better scenario.”

Great atmosphere
It was clearly noticeable on Sunday that the more than 13,500 participants and the massive audience were extremely happy that after two years of forced pause, a ‘real’ Enschede Marathon could finally be held again. “The atmosphere at the start was great, as was the atmosphere along the route and at the finish,” says Melief. “The participants were enthusiastically encouraged by so many people and you could see that many runners, however tired they were, were overjoyed to cross the finish line. For us as organisers, it is great to see that everyone, whether they are running or standing on the sidelines, is so supportive of the event. Enschede Marathon is truly an event that is supported by the city, and this year perhaps even more than usual.”

Winners of the full and half marathon
The elite runners at the Demcon Marathon made it, as the organisation had hoped, an exciting race among themselves. This year’s battle was mainly between Kenyan athletes Julius Tuwei and Enock Onchari, the former of whom came out on top and took the win in 2:07:43 after a superb final sprint. The number two recorded 2:07:52 and third was Tadu Abate from Ethiopia in 2:07:59. In the ladies’ category, Maurine Chepkemoi posted the fastest time of 2:21:10, setting both a course record and a race record. Flomena Daniel finished second in 2:23:53 and Alemtsehay Asefa third in 2:24:42. Fastest Dutchman in the marathon was Geart Jorritsma in 2:23:32 and in the ladies’ category Bertine de Vries in 2:49:18.
The Movella Half Marathon was won by Rik Thijs. He ran the 21.1 kilometres in a time of 1:08:31. Fastest woman at this distance was Ruth van der Meijden (Dutch Marathon Champion 2021) in 1:17:07.

International appearance
The total number of participants on the longest distance showed that the marathon is becoming increasingly popular in Enschede. “This year a total of 1,800 participants were at the start of the longest distance, more than double the number from three years ago.” The participants are no longer exclusively from the region, says Melief. “The Enschede Marathon now has an international reputation, we notice. That applies to all distances. No fewer than 36 different nationalities were present this year. It was noticeable that more than 1,600 participants came from Germany.”

Menzis Twee van Enschede
A special mention goes to the event the Menzis Twee van Enschede, which was organised a day earlier, on Saturday evening. Even though the Enschede Marathon is a top sporting event, the organisation also wants to encourage people who have difficulty moving to become active. “That’s why we organised the Menzis Twee van Enschede for the second time together with Menzis, Sportaal and the municipality of Enschede,” Melief says. “There is no timekeeping and therefore no time pressure or competition. Everyone could participate on Saturday at his or her own pace, the pleasure of moving is central.” The two English Mile (3.2km) route went right through the centre of Enschede with the start and finish at the Oude Markt. “It was even more fun than we could have imagined beforehand,” says Melief. “It was a cheerful party with only happy and enthusiastic participants. We are proud of that too, because that is Enschede Marathon!”