75th Anniversary: a great reason for a party!

Home » 75th Anniversary: a great reason for a party! 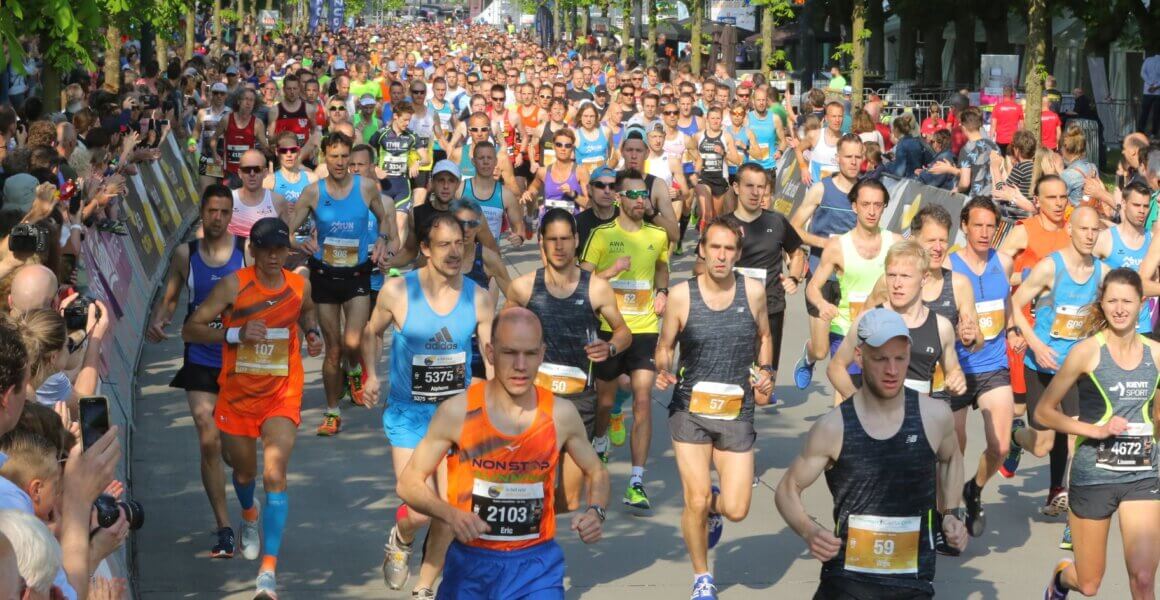 75th Anniversary: a great reason for a party!

Enschede Marathon has every reason to celebrate an even bigger running festival than usual on Sunday, 24 April. This year, it is not only 75 years since the first edition took place – which makes the event the oldest marathon in the Netherlands and Western Europe – but the participants can also finally enjoy a ‘real’ running competition again after two years of enforced rest. “The participants are very much looking forward to this and so are we as an organisation,” says Sandra Melief, Director of Enschede Marathon. “What’s more, we have an absolutely top field at the start this year!”

Top and amateur sport
Since the very first edition, on Saturday 12 July 1947, the Enschede Marathon has developed into a multi-day event for top and amateur sports. While 75 years ago 51 participants started (of whom 33 made it to the finish line in G.J. van Heekpark), this Sunday over 12,000 runners from home and abroad are expected to participate in distances ranging from 5 to 42.195 kilometres. “”It is striking that among the 33 different nationalities, almost 1,400 participants come from Germany,” says Melief. “And to complete the story: on Sunday, the Humankind Kidsruns will take place at ten different locations in the city for children aged 3 to 12, with distances from 1 to 4 kilometres.”

Top international field
Not only in terms of numbers has Enschede Marathon developed enormously. For example, Enschede Marathon now has the Elite Label from World Athletics, which is considered one of the highest quality labels in road athletics. “One of the conditions is that there must be a top international field at the starting line,” says Melief. “And there certainly is, because no fewer than forty top athletes have been contracted this year. Not only from the well-known running countries Kenya and Ethiopia, but also from Uganda, Zimbabwe, Morocco and Brazil.”

Superfast times
In the men’s race, the battle for victory promises to be not only exciting but also spectacular, as a number of super-fast athletes are at the starting line. For example, next Sunday’s two biggest contenders, Ethiopian-born Fentahun Hunegnaw and Tadu Abate, finished in 2:06:04 and 2:06:13 respectively at the 2019 Amsterdam Marathon. Their compatriot Abe Gashahun, who ran 59 minutes 46 seconds in the half marathon in Copenhagen last September, could also surprise with a time of 2 hours 5 minutes. And what about Tesfaye Abera (Ethiopia) and Julius Tuwei (Kenya), who ran their best times (2:04:24 and 2:05:06) in 2016 and 2017, but who should still be able to compete for the victory. Melief: “With all these fast runners, the chance of knocking the course record (2:07:20, which dates back to 2011) out of the books is almost one hundred percent.”

Fast ladies
The same applies to the course record in the women’s race, which has stood at 2:27:00 since 2019. The top favourite in the women’s race, Maurine Chepkemoi from Kenya, recorded a super-fast time of 2:20:18 in last year’s Amsterdam Marathon. Another contender for victory among the women is Rodah Jepkorir Tanui from Kenya. She was the runner-up in Enschede in 2019. An interesting outsider is the Ethiopian Zenebu Fikadi, who won the half marathon in Lille a month ago in a fast 1:06:56. In short: fireworks can also be expected in the ladies’ category!

Bonus of 10,000 euros
And there is even more to be earned this Sunday, according to Melief. “There is a bonus of no less than 10,000 euros for the man and woman who break the race record that was set last year during the NN Mission Marathon at Twenthe Airport. For the men, that is 2:04:30 by Eliud Kipchoge and for the women 2:25:59 by Katharina Steinruck. Especially for the women, that should be achievable, but we also like to be surprised by one of the fast men.”

Dutch participants
Several top Dutch runners will also be at the start of the marathon. The most important of these is Roel Wijmenga, who is the fastest runner on paper with a PR of 2:17:21. But also runners such as Wesley Gouw, Fabian ten Kate and Geart Jorritsma are expected to deliver. Remarkable detail: Jorritsma was the overall winner of the Enschede Marathon in 2:26:34 in 2019.

Get Ready
Besides all this violence of the top runners, there is of course even more to experience during the marathon weekend, which already begins on Friday evening, 22 April. That’s when the second edition of ‘Get Ready’ will take place, a lecture that Enschede Marathon organises together with the University of Twente about newest insights in running. “That was a great success in 2019, so of course we’re doing it again this year,” says Melief. “We think it is important that runners of all levels can learn about the latest developments in running and benefit from them.”

Menzis Twee van Enschede
Even though the Enschede Marathon is a top sporting event, the organisation also wants to involve people who have difficulty moving, Melief says. “That is why we are organising the Menzis Twee van Enschede together with Menzis, Sportaal and the municipality of Enschede on Saturday evening 23 April. This is a cheerful and informal event in which everyone can participate at his or her own pace. There is no time keeping.” The two-mile (3.2 km) route runs straight through the centre of Enschede and starts and ends at the attractive Oude Markt square. “There’s plenty to see and hear along the way too, so it promises to be a real exercise festival.”

Many participants at marathon
On Sunday, in addition to many top runners, there are remarkably many amateur runners at the start of the marathon. Melief: “Over 1,600 marathon runners have already registered for the longest distance, twice as many as in previous years. Why is that? Of course everyone is happy that after two years finally a marathon can be ran again, but according to Melief there is more to it. “As Enschede Marathon we have been very visible the last two years, while nothing was possible and nothing was allowed. In April last year, for example, we organised the NN Mission Marathon at Twenthe Airport with only ten days’ preparation. The absolute world top was at the start with the aim of securing a starting permit for the Olympic marathon in Tokyo. A month later, we organised the test event ‘Ready for Takeoff’, with a 5 and 10 km race. Both times, the resilience and flexibility of our organisation was evident, and apparently appreciated.” Incidentally, that resilience also applies to the sponsors, Melief says. “Even though we had to skip two editions, our sponsors remained loyal to us and we were even able to welcome new sponsors. That ensures continuity in the organisation and that radiates to the participants.”

Award
It was also a great boost that the Enschede Marathon was awarded the prestigious World Athletics Heritage Plaque by the international athletics federation World Athletics (formerly IAAF) at the end of last year. “We as an organisation are extremely proud of this,” says Melief. “Because we received this award not only because of our unique anniversary, but also thanks to our achievements in athletics over the past two years.”

Extra festive
Since 2019, start and finish have been situated on the H.J. van Heekplein in the city centre. “Two years ago we noticed that there is much more contact between runners, sponsors and the public, and therefore even more atmosphere. On Sunday there will also be plenty of entertainment along the route, making it an extra festive edition for everyone, runners, volunteers and spectators. We are not only celebrating our birthday, but are also very happy that after two missed editions we can finally start again on Sunday!